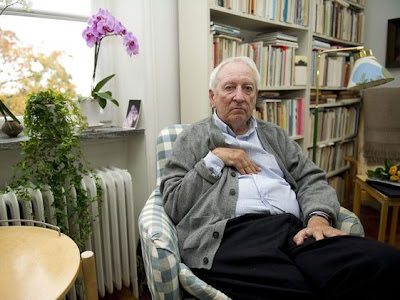 The Indoors is Endless

It's a Spring in 1827, Beethoven
hoists his death-mask and sails off.
The grindstones are turning in Europe’s windmills.
The wild geese are flying northwards.
Here is the north, here is Stockholm
swimming palaces and hovels.
The logs in the royal fireplace
collapse from Attention to At Ease.
Peace prevails, vaccine and potatoes,
but the city wells breathe heavily.
Privy barrels in sedan chairs like paschas
are carried by night over the North Bridge.
The cobblestones make them stagger
mamselles loafers gentlemen.
Implacably still, the sign-board
with the smoking blackamoor.
So many islands, so much rowing
with invisible oars against the current!
The channels open up, April May
and sweet honey dribbling June.
The heat reaches islands far out.
The village doors are open, except one.
The snake-clock’s pointer licks the silence.
The rock slopes glow with geology’s patience.
It happened like this, or almost.
It is an obscure family tale
about Erik, done down by a curse
disabled by a bullet through the soul.
He went to town, met an enemy
and sailed home sick and grey.
Keeps to his bed all that summer.
The tools on the wall are in mourning.
He lies awake, hears the woolly flutter
of night moths, his moonlight comrades.
His strength ebbs out, he pushes in vain
against the iron-bound tomorrow.
And the God of the depths cries out of the depths
‘Deliver me! Deliver yourself!’
All the surface action turns inwards.
He’s taken apart, put together.
The wind rises and the wild rose bushes
catch on the fleeing light.
The future opens, he looks into
the self-rotating kaleidoscope
sees indistinct fluttering faces
family faces not yet born.
By mistake his gaze strikes me
as I walk around here in Washington
among grandiose houses where only
every second column bears weight.
White buildings in crematorium style
where the dream of the poor turns to ash.
The gentle downward slope gets steeper
and imperceptibly becomes an abyss.
Publicada por vítor dias à(s) 23:27