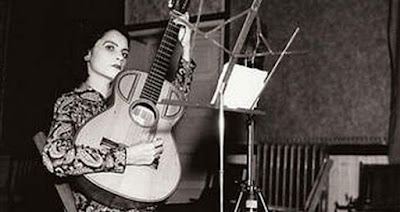 
LYDIA MENDOZA :«Known as "la cancionera de los pobres," Lydia Mendoza was born in Houston in 1916. Musically talented from an early age, she began singing with her family in 1928, when the Mendozas recorded their first record for the Columbia subsidiary OKeh. The Mendozas were one of the first tejano groups recorded by the American major labels. By 1934, now with the Bluebird label (RCA Victor), Lydia had launched her own pioneering solo career, recording such memorable songs as "Mal hombre" ("Evil Man") and "Pero hay qué triste" ("But, Oh, How Sad"). Although she recorded with a variety of instrumental groups during her storied career, Lydia Mendoza is best remembered for the inimitable style she created, which features her twelve-string guitar as the sole accompaniment to her soulful voice. Mendoza's career spanned over 60 years, during which she recorded over 50 LPs and some 200 songs with various labels, both large and small. As a recipient of the National Heritage Award, as well as the National Medal of the Arts, she is justifiably recognized as one of America's great roots music singers.»
Publicada por vítor dias à(s) 16:30