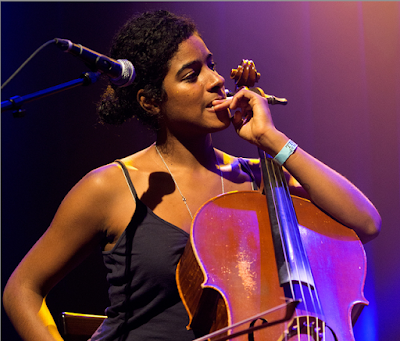 
«Both of McCalla's parents were born in Haiti.[5] Her father Jocelyn McCalla[7] was the Executive Director of the New York-based National Coalition for Haitian Rights[8] from 1988 to 2006[9] and is credited as translator on Vari-Colored Songs.[10] Her mother Régine Dupuy arrived in the United States at age 5, is the daughter of Ben Dupuy who ran Haiti Progrès, a New York based Haitian socialist newspaper.[8] McCalla's mother went on to found Dwa Fanm, an anti-domestic violence human rights organization.[8]
McCalla was born in New York City and raised in New Jersey.[11] She lived in Accra, Ghana for two years as a teen. After a year at Smith College, she transferred to New York University to study cello performance and chamber music. She then moved to New Orleans where she played music on the streets.[11]

Her critically acclaimed album Vari-Colored Songs is a tribute to Langston Hughes which includes adaptations of his poems, Haitian folk songs sung in Haitian Creole[3] and original compositions.[5] McCalla says the first song she wrote for the album was Heart of Gold because it provided "a window into Hughes' thinking".[12] McCalla chose to dedicate this work to Hughes because she says "reading his work made me want to be an artist."[5] McCalla started working on the album 5 years prior to its release.[5] Commentators have noted the influence of Louisiana musical traditions such as old Cajun fiddle melodies and trad-jazz banjo on the album.[4] Members of the Carolina Chocolate Drops appear on the album.[4] The album was financed at least in part through a crowdfunding campaign on Kickstarter which exceeded its goal of $5,000 to raise $20,000.»
(Wikipedia)
Publicada por vítor dias à(s) 13:00