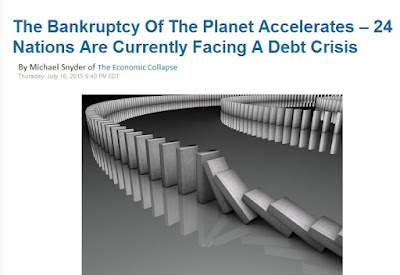 "According to a new report from the Jubilee Debt Campaign, there are currently 24 countries in the world that are facing a full-blown debt crisis…


■ St Vincent and the Grenadines


■ Zimbabwe
Should we have the “wealthy” countries bail all of them out?
Well, the truth is that the “wealthy” countries are some of the biggest debt offenders of all. Just consider the United States. Our national debt has more than doubled since 2007, and at this point it has gotten so large that it is mathematically impossible to pay it off.
Europe is in similar shape. Members of the eurozone are trying to cobble together a “bailout package” for Greece, but the truth is that most of them will soon need bailouts too…

In addition to Spain, Italy and France, let us not forget Belgium (106 percent debt to GDP), Ireland (109 debt to GDP) and Portugal (130 debt to GDP).
Once all of these dominoes start falling, the consequences for our massively overleveraged global financial system will be absolutely catastrophic…