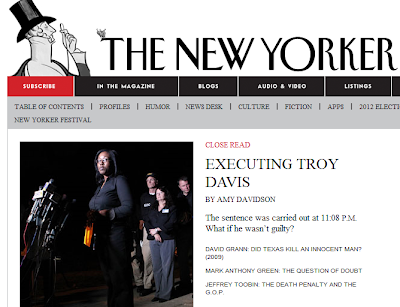 1. Can Troy Davis, who fought to his last breath, actually be dead this morning?
2. If we felt tortured with fear and hope for the four hours that the Supreme Court deliberated on Troy’s case, how did the Davis family feel?
3. Why does this hurt so much?
4. Does Judge Clarence Thomas, once an impoverished African-American son of Georgia, ever acknowledge in quiet moments that he could easily have been Troy Davis?
5. What do people who insist we have to vote for Obama and support the Democrats “because of the Supreme Court” say this morning?
7. Why does the right wing in this country distrust “big government” on everything except executing people of color and the poor?
8. Why were Democrats who spoke out for Troy the utter exception and not the rule?
9. Why didn’t the New York Times editorial page say anything until after Troy’s parole was denied, when their words wouldn’t mean a damn?
10. Why does this hurt so much?
11. How can Barack Obama say that commenting on Troy’s case is “not  appropriate” but it’s somehow appropriate to bomb Libya and kill nameless innocents without the pretense of congressional approval?
12. What would he say if Malia asked him that question?
13. How can we have a Black family in the White House and a legal lynching in Georgia?
14. Why does this hurt so much?
15. Can we acknowledge that in our name, this country has created hundreds of thousands of Troy Davises in the Middle East?
16. Can we continue to coexist peacefully in a country that executes its own?
17. What the hell do I tell my 7-year-old daughter, who has been marching to save Troy since she was in a stroller?
18. If some of Troy’s last words were, “This movement began before I was born, it must continue and grow stronger until we abolish the death penalty once and for all”, then do we not have nothing less than a moral obligation to continue the fight?
Publicada por vítor dias à(s) 00:10