Apresentação: «Can a country be a democracy if its government only responds to the preferences of the rich? In an ideal democracy, all citizens should have equal influence on government policy--but as this book demonstrates, America's policymakers respond almost exclusively to the preferences of the economically advantaged. Affluence and Influence definitively explores how political inequality in the United States has evolved over the last several decades and how this growing disparity has been shaped by interest groups, parties, and elections.
With sharp analysis and an impressive range of data, Martin Gilens looks at thousands of proposed policy changes, and the degree of support for each among poor, middle-class, and affluent Americans. His findings are staggering: when preferences of low- or middle-income Americans diverge from those of the affluent, there is virtually no relationship between policy outcomes and the desires of less advantaged groups. In contrast, affluent Americans' preferences exhibit a substantial relationship with policy outcomes whether their preferences are shared by lower-income groups or not. Gilens shows that representational inequality is spread widely across different policy domains and time periods. Yet Gilens also shows that under specific circumstances the preferences of the middle class and, to a lesser extent, the poor, do seem to matter. In particular, impending elections--especially presidential elections--and an even partisan division in Congress mitigate representational inequality and boost responsiveness to the preferences of the broader public.
At a time when economic and political inequality in the United States only continues to rise, Affluence and Influence raises important questions about whether American democracy is truly responding to the needs of all its citizens.» 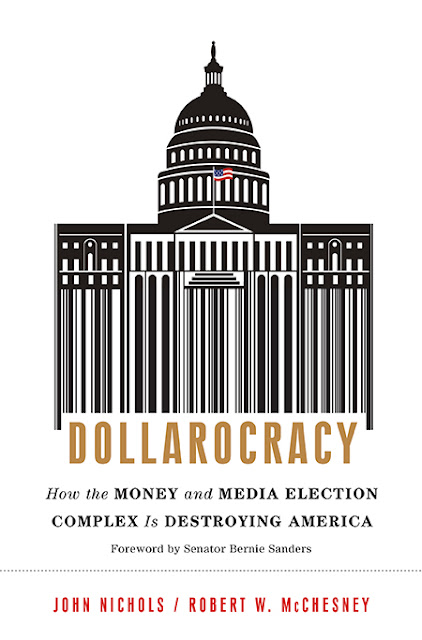 Blending vivid reporting from the 2012 campaign trail and deep perspective from decades covering American and international media and politics, political journalist John Nichols and media critic Robert W. McChesney explain how US elections are becoming controlled, predictable enterprises that are managed by a new class of consultants who wield millions of dollars and define our politics as never before. As the money gets bigger—especially after the Citizens United ruling—and journalism, a core check and balance on the government, declines, American citizens are in danger of becoming less informed and more open to manipulation. With groundbreaking behind-the-scenes reporting and staggering new research on “the money power,” Dollarocracy shows that this new power does not just endanger electoral politics; it is a challenge to the DNA of American democracy itself.
Publicada por vítor dias à(s) 07:30