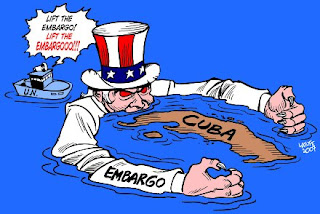 
"Future students of American history will be scratching
their heads about this case for decades to come.
Our embargo and refusal to normalize diplomatic
relations has nothing to do with communism.
Otherwise, we wouldn't have had diplomatic
relations with the Soviet Union throughout the Cold War,
with China since Nixon, and with Vietnam
despite our bitter war there.
No, Cuba was pure politics. Though it started out to be
a measure of an administration's resistance to
Castro's politics, it very soon became a straight-jacket whereby
first-generation Cuban-Americans wielded inordinate
political power over both parties and constructed
a veto over rational, mature diplomacy."
— Gary Hart, former U.S. Senator, March 2011 (in Wikipedia)
Publicada por vítor dias à(s) 22:07