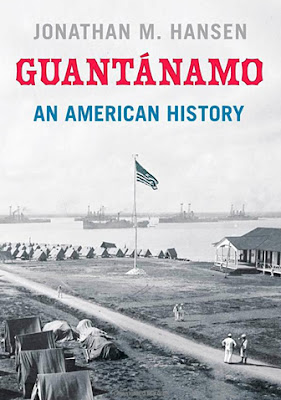 Apresentação do editor:« An on-the-ground history of American empire :Say the word “Guantánamo” and orange jumpsuits, chain-link fences, torture, and indefinite detention come to mind. To critics the world over, Guantánamo Bay, Cuba, is a striking symbol of American hypocrisy. But the prison isn’t the whole story. For more than two centuries, Guantánamo has been at the center of American imperial ambition, first as an object of desire then as a convenient staging ground.
In Guantánamo: An American History, Jonathan M. Hansen presents the first complete account of this fascinating place. The U.S. presence at Guantánamo predates even the nation itself, as the bay figured centrally in the imperial expansion plans of colonist and British sailor Lawrence Washington—half brother of the future president George. As the young United States rose in power, Thomas Jefferson and his followers  envisioned a vast “empire of liberty,” which hinged on U.S. control of the Gulf of Mexico and the Caribbean Sea. Politically and geographically, Guantánamo Bay was the key to this strategy. So when Cubans took up arms against their Spanish rulers in 1898, America swooped in to ensure that Guantánamo would end up firmly in its control. »
Publicada por vítor dias à(s) 20:57