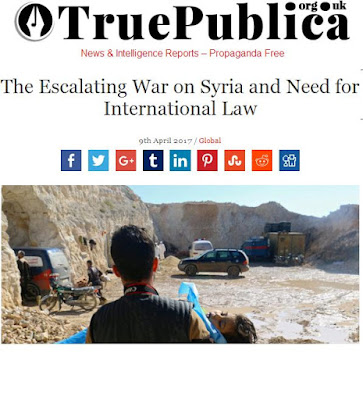 (...) (2) Extremists were responsible for the August 2013 Chemical Weapon attack in Damascus.
Western supporters of the armed opposition were quick to blame the Syrian government for the chemical attack in Ghouta on 21 August 2013. However, subsequent investigations by the most credible investigative journalists and researchers concluded the Syrian government was probably NOT responsible.
Seymour Hersh and Robert Parry concluded the attack was most likely carried out by militants with support from Turkey. The in depth examination titled WhoGhouta concluded “The only plausible scenario that fits the evidence is an attack by opposition forces.” An MIT study made a detailed trajectory analysis, concluded that the missile could not have been fired from government territory and warned “Faulty intelligence could have led to an unjustified US military action.”

Armed Opposition Groups have a history of Staging Incidents
From the start, the Syrian conflict has included an information war. Hillary Clinton boasted of “training for more than a thousand activists, students and independent journalists.”  In December 2012, NBC journalist Richard Engel was reportedly kidnapped and abused by “shabiha” supporters of the Syrian government. Engel and his film crew were “liberated” by Free Syrian Army rebels after a gunfight with the Assad supporting kidnappers. In reality, the entire episode from kidnapping to rescue was a hoax designed to demonize Assad supporters and glorify the “rebels”. The true story emerged years later after the actual events were leaked. When it was going to be made public, Engel finally admitted the truth.

(4) Supporters of the armed opposition have a history of fabricating stories which demonize the Syrian Government.
In February 2014, it was announced that a defecting Syrian military photographer, who was anonymous but code named “Caesar”, had 55 thousand photos showing the torture and murder of 11 thousand innocent Syrian civilians.  This news received sensational media attention with live interviews on CNN and front page coverage throughout the western world. The news relied on the judgment of legal prosecutors who “verified” the story and produced a “Caesar Report”. This was released the day before the start of Geneva negotiations. It effectively disrupted the talks and facilitated the “rebels” refusal to negotiate and walk away. In reality, the “verification” and report was commissioned by the government of Qatar which has been a major funder of the armed opposition. Since then it has been discovered that nearly half the 55 thousand photos show the opposite of what was claimed: they show dead Syrian soldiers and victims of explosions NOT tortured civilians. That is just one of the findings confirming the fraud involved in this sensational story. A concise expose of “Caesar” is here.

How the Public has been Misinformed on Syria

Historian and journalist Stephen Kinzer has said, “Coverage of the Syrian war will be remembered as one of the most shameful episodes in the history of the American press.” (...)