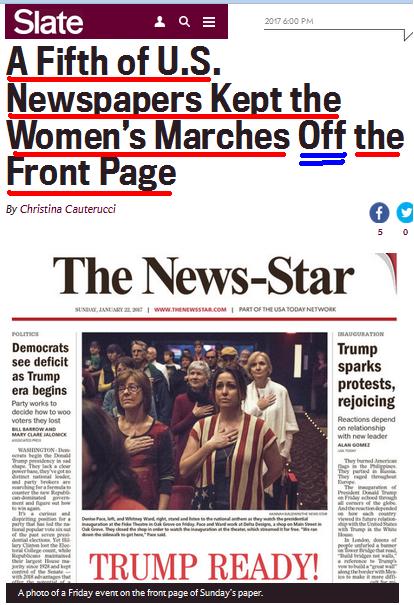 According to an admittedly conservative estimate from FiveThirtyEight, more than 3.2 million people attended women’s marches in hundreds of towns and cities around the world on Saturday. It may well have been the largest demonstration in U.S. history.


.And yet a full half the hundreds of newspapers archived by the Newseum didn’t make the marches the lead story in Sunday’s issue. A Quartz tally of around 450 papers’ front pages found that, while publications in all major U.S. cities and many papers in other countries led with coverage of the marches, 27 percent mentioned the protests in a smaller spot on the front page. More than a fifth—22 percent—didn’t mention the march at all.
The Women’s March on Washington was the main event on Saturday, but there were marches in communities all over the country. Many local papers likely steer clear of national stories, which could explain why some of them ran pieces on relatively small local matters on the front page if there wasn’t a nearby march to cover or a cabal of local folks heading to D.C. for the big one. That may be why the Enterprise Ledger of Alabama ran an A1 story on an awards banquet for the local football team, and why the Delaware State News printed “A Vision for Dover Mall” on the front page, with no mention of the 1,000-person march that happened elsewhere in the state.
But many U.S. local papers dedicated their entire Sunday front pages to Trump, ignoring the massive marches against him—and against the systemic forces that got him to the presidency—completely. On the day after the marches, the front page of Alabama’s Sunday Dothan Eagle featured a story on Trump’s CIA press conference, a piece on Trump’s executive order affecting the Affordable Care Act, and a Q and A with local political party leaders about “the future of jobs, military, and guns.” Florida’s Villages Daily Sun populated the near entirety of its front page with pretty capsule biographies of Trump’s proposed cabinet. The News-Star of Monroe, Louisiana, ran a big color photo of women pledging allegiance at a local Donald Trump party on Friday night, a day and a half before the paper came out. “Trump Ready!” read the headline. Nearly 200 people marched in Green Bay, Wisconsin on Saturday, in solidarity with millions of others around the world; but you wouldn’t know it from the Sunday issue of the Green Bay Press-Gazette, whose front page featured an NFL preview and giant illustration about a teen’s mental health.
In other words, it’s possible that a not-insignificant swath of America has no idea that one of the largest single organized protests the world has ever seen took place on Saturday. There has been much talk since the election about how social media networks and ideologically skewed online media outlets have erected so-called “bubbles” around segments of the country, but for those people who still get their news from the local paper, the bubbles may be particularly impermeable.
As Quartz’s Christopher Groskopf points out, the people who are most likely to make the local papers their primary news source are disproportionately old, white, and rural-dwelling—demographics that usually lean conservative and went for Trump in November’s presidential election. These people aren’t necessarily getting their “news” from Breitbart and Fox. They’re absorbing a less extreme but similarly limited worldview from their local papers. Taking a peek at these communities’ news sources can make for a fascinating thought experiment on alternate universes—or “alternative facts.” The progressive bubble hears about hateful Trump rallies and underestimates their power. In some right-wing bubbles, the resistance doesn’t even exist.
Publicada por vítor dias à(s) 00:29