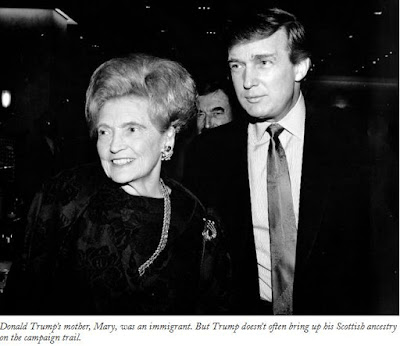 Donald Trump’s mother, Mary, was an immigrant. But Trump doesn’t often bring up his Scottish ancestry on the campaign trail.Photograph by Marina Garnier / NYP Holdings, Inc. via Getty

In November of 1929, a seventeen-year-old Scotswoman, Mary Anne MacLeod, boarded the S.S. Transylvania in Glasgow, bound for New York City. With a high arching brow and deep, round eyes, MacLeod hailed from Tong, a remote fishing community in the parish of Stornoway, in the Outer Hebrides of Scotland. Although the American stock market was in a freefall, Europe, in the shadow of war, was in no better shape. Scots had been emigrating for years, trying to find better opportunities.
In New York, MacLeod would find a well-established community of countrymen and women, including two of her sisters. She took more than one transatlantic trip before settling in New York, in the thirties. On at least two ship manifests and in the 1930 census, her occupation is listed as “maid” or “domestic.”
Mary MacLeod would eventually become Mary Trump, the mother of Donald Trump, the presumptive Republican nominee for President. She died in 2000, long before her son’s political ascent but not before he became a business celebrity. This week, Trump visited his mother’s homeland, attending the official opening of a renovated Trump Turnberry, a golf course he owns in South Ayrshire. As global markets dropped precipitously in response to the Brexit referendum, just the day before, in which British citizens voted to break from the European Union, Trump praised the  sprinkler systems on the course—“the highest level”—and Turnberry’s “incredible suites.” His Turnberry speech was almost entirely about his golf course, but he did talk about his mother, and how she had enjoyed eating dinner at Turnberry when she returned to Scotland to visit. “Her loyalty to Scotland was incredible,” he said. “She respected and loved the Queen.”
Like Barack Obama’s father, Trump’s mother was an immigrant. But Trump doesn’t often bring up his Scottish ancestry on the campaign trail. The “about” section of the Trump campaign’s Web site makes no mention of the Scottish-born matriarch, nor have his opponents reached much for the chance at a dig, given Trump’s campaign-defining comments about immigrants, at least those from Mexico or who are Muslims. Only Ted Cruz brought up Mrs. Trump’s Scottish birth, in a Republican Presidential debate in January. 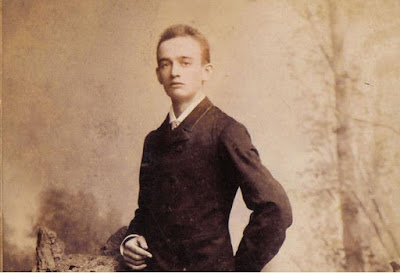 On October 19, 1885, the S.S. Eider approached Sandy Hook, New Jersey, and the Narrows, twelve days after it had departed Bremen, Germany. As the four-hundred-and-thirty-foot vessel navigated through New York Harbor, it would have passed Bedloe’s Island, on the port side, where an enormous pedestal was under construction. The Statue of Liberty was nearby, in crates, not yet assembled. Like so much of America, she was a work in progress.

On deck, a sixteen-year-old boy was carrying the hopes of his family, back home in Germany. The Drumpfs had long before simplified their name to Trump, and they were shedding the superfluities of Europe in other ways, too. Friedrich, the young man on board, had trained as a barber’s apprentice, but saw little reason to stay in the small town of Kallstadt, in the Palatinate, where his prospects were limited. He harbored higher aspirations.
For Trump, as for most immigrants to New York at the time, the point where he would disembark was Castle Garden, at the foot of Manhattan. Ellis Island would not open its doors until 1892. Castle Garden was neither a castle nor a garden but an old fort, built at the Battery. Its original purpose was to repulse the British, who appeared likely to invade again, when the fort was built, on the eve of the War of 1812. But, as the city grew, priorities shifted, developers sniffed around, and suddenly the old fort was welcoming foreigners instead of defending against them. Castle Garden was repurposed as a beer garden, a musical theatre, and, finally, as the Emigrant Landing Depot, where immigrants were processed by the State of New York before they would begin new lives.« (...)
(in The Nation)