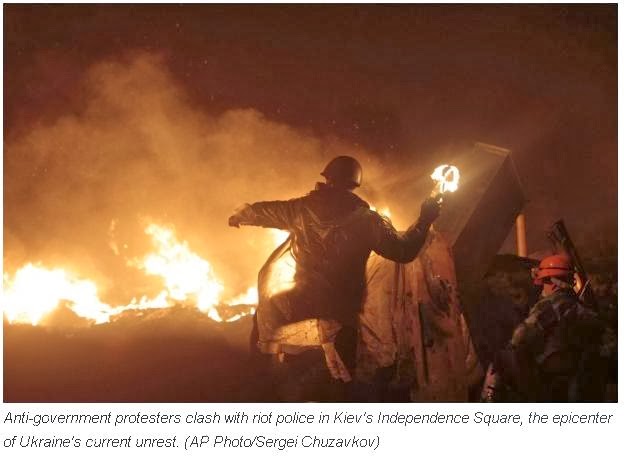 ver tradução de um leitor na caixa de comentários
«(...) One reason for this is simply amnesia. Four generations have passed since fascism rose to power in the heart of Western Europe, sweeping aside the weak and ineffective popularly elected governments. It seems implausible for such a thing to happen in Europe today. Understandably, Europeans would much rather dwell on how postwar fascism in Italy, Spain and Portugal gradually became reconciled to the basic principles of liberalism and constitutional democracy, than to accept the idea that they are witnessing a slow-motion replay of the March on Rome organized by Italian fascists in 1922.
But the single most important reason Western governments cannot see the dangers to democracy in Ukraine is the assumption that simply by being against Russia one must at the same time support democratic values. For the United States, in particular, this is a recurring theme. During the Cold War the United States often provided crucial assistance to “friendly fascist” dictatorships in its struggle to prevent the expansion of Soviet communism. So today, even though communism is no longer a threat, and Russia is calling upon all parties to let Ukrainians sort out their own issues without external interference, many in the West continue to act as if the major problem in Ukrainian politics is Russian involvement. Of course, Russia’s deep cultural, linguistic and religious ties with Ukraine cannot be overlooked, but this only makes the absence of Russian politicians in Kiev during the current crisis stand in sharp contrast to the daily pilgrimages there of European and American emissaries.
Western policy has lost touch with reality in Ukraine because it is Russia, not Ukraine, that is its real focus. Simply put, Western policy has lost sight of Ukraine itself.
What needs to be done to get Ukraine back into focus?
First, stop talking about “the Ukrainian people” as if it were a monolithic concept. Two closely related, but distinct, cultural heritages comprise Ukrainian identity—Ukrainian and Russian. Attempts to isolate, ignore or minimize the importance of the Russian cultural component of Ukrainian national identity, to which more than half the population give some allegiance, can only lead to more political conflict.
Second, stop trying to force Ukrainians to choose between Europe and Russia. Every survey indicates that this is a choice that people do not want to make. A broader view of European identity, one that accepts Russia as part of Europe, would be the one with the most appeal in Ukraine today. (...)»

Nicolai N. Petro aqui
(Nicolai Petro is a professor of political science at the University of Rhode Island and Fulbright Research Scholar in Ukraine)