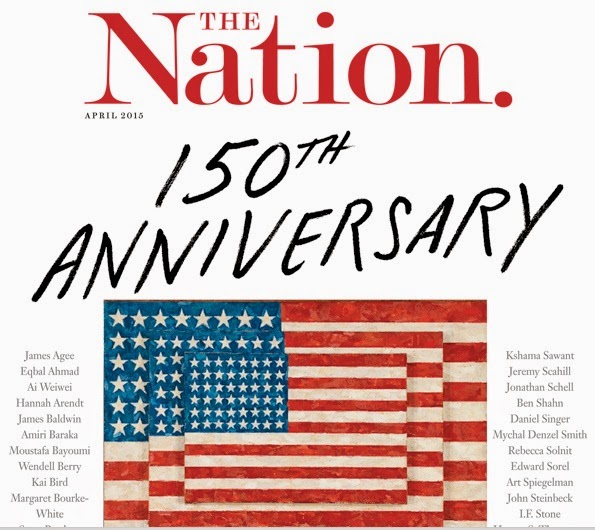 Dear Friend of the Nation,


The year 2015 marks The Nation's 150th anniversary. This week, to celebrate the occasion, we're publishing a tremendous and tremendously exciting special anniversary issue.
This 268-page issue, which I co-edited with D.D. Guttenplan, our London correspondent, weaves together voices from The Nation’s rich history with a stunning collection of contemporary contributors writing about the current cultural and political moment. In three sections of archival excerpts, each representing five decades of the magazine’s history, we reprint some of the best that was thought and said in our pages—much of it inspiring and eerily prescient, some of it shocking. We have also included a few selections that turned out to be less than prophetic—testimony to the magazine's willingness to take intellectual risks.
Interspersed with these archival excerpts are three sections of entirely new material. In the first, “The Nation and the Nation,” writers explore the magazine’s outsized influence on everything from poetry to feminism, radicalism to right-wing conservatism, Cuba to coverage of the arts. In “Fierce Urgencies,” contributors consider topics like the politics of fear, from anticommunism in the 1950s to Islamophobia today, and the relationship of the left to power—in movements, in electoral politics and in government. Finally, in“Radical Futures,” writers and activists map out new strategies for radicals, progressives and liberals seeking to expand the terms of our public discussion and look beyond the present moment.
Change is inevitable, but the one constant in The Nation’s history has been a faith—not in political parties or policies, but in what can happen when you tell people the truth. This belief has sustained The Nation since its founding: that and the idea that there are always alternatives—in history, in politics, in life—that would make our country and the world a more humane, just and secure place.
Our very first issue described “the conflict of the ages, the great strife between the few and the many, between privilege and equality, between law and power, between opinion and the sword.” This anniversary issue is a record of the last 150 years of that conflict—and a promise to the future that as long as The Nation is around, that fight will go on. With your help, we'll be fighting for another 150 years and beyond!
Warmly,