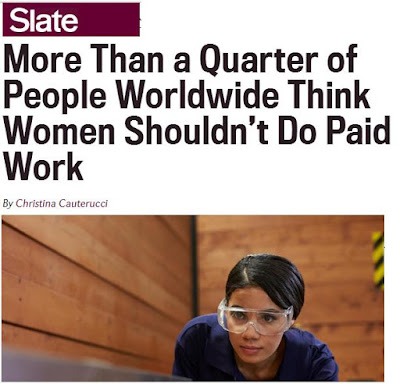 «A gigantic new poll from Gallup and the International Labour Organization has found that more than a quarter of both men and women worldwide think women should stay home to raise kids and do housework instead of holding a paid job. The survey, which reached almost 149,000 adult participants in 142 countries and territories in 2016, was released Wednesday for International Women’s Day, and the pollsters says it's representative of more than 99 percent of the world’s population.

Participants were given three options for their preferred female employment situation: staying home to do unpaid homemaking and care work; doing paid work outside the home; or doing both. Of men, 29 percent said they thought women should just stay home, while a slightly smaller proportion, 28 percent, thought women should just do paid work. Among women, 27 percent preferred doing unpaid housework and 29 percent wanted just a paid job. A plurality of both—40 percent of women and 38 percent of men—wanted women to do both.
When the report’s authors separated the results by region, stark differences came to light. The men of North Africa were more likely than anyone in any other region to say women should stay home—51 percent registered that preference. In Arab nations, 45 percent of men felt the same. North American men were closer to the global average; 21 percent said a woman should only do unpaid work at home. Men in Northern, Southern, and Western Europe were most amenable to women in the workforce: Just 12 percent want women to stay at home.
The survey found that, though cultural and family norms are major predictors a woman’s desire to work outside the home, 36 percent of women who live in households that deem it not acceptable to do paid work outside the home still want to do so, whether solely or in addition to their housework. The poll’s authors note that, of the more than half of women worldwide who are not currently in the workforce, a 58 percent majority wish they were, and that 70 percent of women and 66 percent of men overall think women should hold paid jobs of some kind.
When participants were asked about the biggest challenge for women who work outside the home in their respective countries, the most frequently cited issue was balancing work and family life, followed by affordable child care. People in developed nations were more likely to express concern about wage equality, the top issue mentioned in the U.S., while residents of developing nations were more likely to cite unfair treatment, harassment, and workplace abuse.
One of the more telling takeaways from this survey is that a sizable plurality of both men and women in most regions, including North America, believe that women should both work a paid job and, as the survey put it, “take care of [the] family and the housework.” Though the gender “chore gap” is slowly shrinking, women do the bulk of housework and child care in every country where it’s been measured. That often translates to less capacity to take on higher-paying leadership roles at work and less energy for personal pursuits.
Perhaps oddly, in North America at least, more women than men think women should do housework in addition to paid work. In urban areas in the U.S. and Canada, 32 percent of men who took the survey thought women should only have paid jobs; just 19 percent of women felt the same. Perhaps the men of North America felt weird about assigning women so much labor. Urban women, meanwhile, under internal and external pressures to be high-achieving careerwomen who are also attentive mothers and homemakers, feel a clearer mandate to do both.»
Publicada por vítor dias à(s) 15:55